The 4M Tin Can Robot Toy: It’s Cheap But is it Any Good? 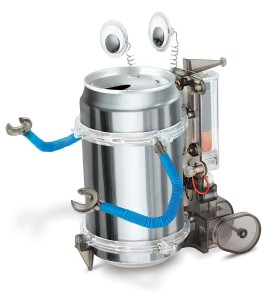 The 4M Tin Can Robot sure won’t break your bank balance, but does it make a good educational toy?

We’ll come on to that in a bit, but for those of you who don’t know what this robot toy is about, I’ll break it down really quickly. The 4M or soda can robot as it’s often referred to is a pretty simple toy that turns an empty pop can into a googly-eyed, wobbly walking robot; bringing a fun element to robotics and the concept of recycling.

You’ll need a few items before you begin building the robot – a really good screwdriver, an empty soda can, 2 AAA batteries and patience. Lots of it! Everything else is right there in the box.

Now it’ll probably take round an hour, maybe two to actually build the robot but it’s an enjoyable project that you can work on with your child. Depending on your child’s the level of dexterity, they may find certain things a bit fiddly (I’m mostly talking about the screws here – they’re tiny!), so you may be called upon to help out.

The recommended age for this tin can robot is 8 years plus, but according to reviewers some of their 8 year olds had a little trouble understanding the manual. In fact even a few older children seemed to struggle with the instructions, finding certain parts to confusing. Still, once you and your child get your heads around the how to build it, you’ll soon have a pretty neat looking robot toy.

I really do like the idea behind this robot as it provides a valuable lesson in home recycling. It’s practical projects such as these that get kids thinking about how they can recycle everyday trash in creative ways.

Take a look at the tin can robot in action:

I’ll admit when I first saw this robot, I thought it looked quite fragile and I’m the sort of person who goes for durability. I could be wrong but I don’t see this robot living very long around my brood of munchkins. They play hard with their toys and take no prisoners. But going by the many positive reviews this robot kit has received, most people seem to be fine with the apparent lack of sturdiness.

The real fun of this kit revolves around actually putting it all together. Your child will be challenged by the mechanics of this robot, which is what you’d expect from any good educational toy. They’ll sit and have to concentrate for what seems like a really long time while they work out how to build it. Once it’s built they’ll enjoy playing with it, but I do wonder for how long?

My impression is that the 4M Tin Can Robot is more of an exhibition toy; as in your child builds it for the purpose of displaying it on a shelf or in a cabinet. That’s not to say this robot can’t be played with, but in my humble opinion, this is one toy which is designed for moderate use. In this instance, the enjoyment of the robot would come from the process of actually building it.

Buy this kit for: Children who know how to care for fragile toys and patient parents who don’t mind giving up part of their weekend to help construct it.

Overall I think the soda can robot is a good educational toy. It will give your child a fundamental grounding in mechanics that they can later apply to larger robotics projects.  My only concern is around the overall robustness on the robot, but that’s a minor concern. I mean this tin can kit is pretty inexpensive to buy so I’d say worry less about the longevity and focus more on the educational value it brings to the table.